With the lack of camping trips this season, my husband was getting pretty desperate. I admit I missed camping too but I can survive one year where we take a bit of a break from it.

Still, he pushed and pushed. And we fought about it as well. In the end, we came to a happy resolution by meeting in the middle.

He wanted to go somewhere about an hour away. I had no time to prep. So… we tried out this independent campground just 10 minutes away. It’s not a provincial park but had amazing hiking trails surrounding the campground.

All were happy and I’m glad we did it. It also gave us a chance to try dehydrated eggs (with grass-fed, hormone-free, anti-biotic free bison sausages).

No, we weren’t aiming to create a gourmet meal here. There is hopes to do a portage/canoe trip where we’ll have to be somewhat creative with how we eat since we won’t have the opportunity to lug around a cooler. We’ve managed in the past – it’s do-able if we only go for two nights, preferably near the end of the summer when it’s not as hot.

The only problem is most of the dehydrated food packages is really high in either carbs or sugar. Which is exactly why our only option so far was to purchase these dehydrated eggs. The verdict? Edible but of course, no where near as good as actual eggs. 🙂

Of course, we made sure we went on a lovely hike. For the entire morning, it rained. Which was fine. We slept in and had a very late brunch in the trailer.

By the time the sky cleared, we were ready to stretch our legs. Plus, Hobbes needed to burn off some energy. We hiked for an hour – and got our fill of fresh air.

We were only semi-prepared for the cold. The forecast showed and even lower dip for the temperature that night. While we brought along a of of fleece tops and bottoms, we didn’t have anything for our heads or Chaeli’s hands.

So, we took a quick trip to Sails and took advantage of their 50% toque sale (we were only 15 minutes away from one of the locations).

There was a Dollarama next to it so we picked up some 3-in-1 gloves for Chaeli.

One way I was convinced to go camping on such a cold, rushed weekend… witness the above photo. This picture does not do these steaks any justice. I bought these earlier that day at Whole Foods. Yes, I paid a mint for each. They are hormone and anti-biotic free. And about 2 inches thick!

I’ve had some pretty seriously good steaks in my life. But only a couple stand out. The one was on our last Princess Cruise when we paid cover charge to dine in the Crown Grill Restaurant. The second would have been the Tomahawks we bought as part of my dad’s Father’s Day gift.

These recent steaks would be amongst the top three. Every bite had an amazing flavour. Well worth the money.

And yes, even Hobbes got some of Doug’s scraps with his dinner.

It was a nice little get-away, once again, in our little trailer. And as the title of this post suggests, it’s not our last camping trip. We’ll be needing more winter gear as we head up further north in a few weeks to camp by Georgian Bay. What? You say we’re crazy?

No, let me correct you. My husband is crazy. We’re just not very bright for letting him convince us to go along with his craziness. 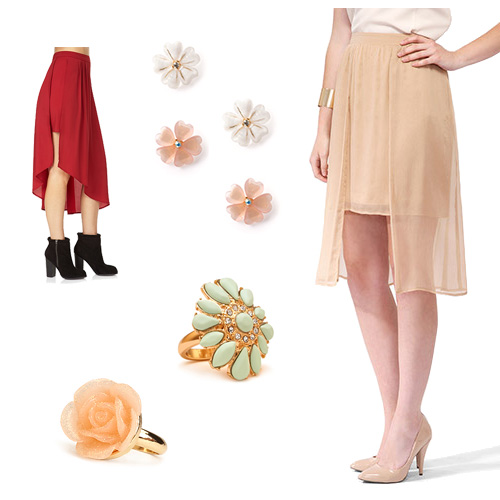 I hate shopping. In a mall.

But online shopping? The comforts of picking out my clothes and accessories while in my pj’s while sipping coffee BEFORE the malls open is my guilty pleasure. Not having to deal with parking and crowds is a huge bonus.

I recently had discovered Forever 21 the last time I did go shopping at a mall. It was the first time I went into this store and was just in heaven after discovering their line of fashion jewellery – all at a reasonable price especially as they had a sale that day.

I’ve really been attracted to the asymmetrical look as well as delicate flowers to accent one’s outfit. The above is a sample of what is setting the softer look for my spring/summer wardrobe.

Mind you, the hem of the inner layer part of the skirts are a couple of inches lower on me. The models for each article of clothing is described as far as their height and measurements (and what size they are wearing) to give the shopper a better understanding of what they are about to buy. Most models are around the 6′ mark. So while the skirts look short, on an average woman like me, they are quite the right length and fit for office wear.

I suppose that’s why I never gave Forever 21 a chance – all their skirts look really short and most clothes are meant for younger people (hence ’21’ in the name). I’ve discovered though that there are collections one can find even for my age (41 and counting) if worn with some thing else and accessorized appropriately.

Thus far, I’ve worn all the jewellery and the one cream-coloured skirt. All have received positive comments. Looking forward to wearing the red one with my peek-toe, black booties!

well, okay… i hardly would say i’m a shop-a-holic. but it feels like that lately. which isn’t ideal – as we’re trying to save money.

but i have a walk-in closet filled with more clothes that are at least 1x’s to 3x’s too big. i had spent some energy and money to replace some pants that are too big than clothes that do fit. i did take advantage of some end-of-winter sales (for example, five dollar sweaters) for some fall/winter wear.

but now, spring and summer approaches.

a couple of nights ago,  i was not able to find a single shirt/blouse that matched my new red, pop-colour pants. i went through about FIVE tops – all just too baggy. i was getting pretty frustrated as i marched in to my closet, pulling another top to try on. and then another. by the fifth trip, my step was heavier and quicker with determination.

i finally settled for one blouse. the material is thin so while it is still too big, at least it drapes closer to my body for the illusion of a better fit.

meanwhile, hobbes just sat on the floor watching me walk by him a dozen or so times. his head turned to following me back and forth. he knew to stay out of my way since i was on a mission. but he was definitely a bit on edge sensing my frustration.

and so later on that night, these were ordered online… and none of the items were over $11!

they are simple – easy enough for me to accessorize for casual wear or a day at the office (spring/summer wear, that is).

the problem is, now i want new jewellery!

it never ends, does it?

and i don’t love shopping. the issue is, i like to do things to completion. so, if i need a new wardrobe, it’s hard for me to stop just at a couple of purchases. i need to see things done to the end. i’m like that pretty much with everything i start.

though… okay, jewellery and shoes are probably one of my guilty pleasures. it’s much easier. with shoes, one size is one size. and i’ve been a size 7 since i was a teen. and necklaces, earrings (and fashion scarves, come to think of it) – one size fits all!

i just went to old navy to take advantage of their $15 jean sale (only for today) and decided to take some time in the fitting room. i knew i needed a smaller size since i’ve been belting up my size 10 (also from old navy) for awhile now.

i picked up two different types of leg opening – skinny and boot cut. both size 8.

i walked out to the mirrors where doug and chaeli were waiting for me. doug asked, “so how are they?”

looking in the mirrors, i frowned as a replied, “i don’t know. they’re comfortable. but awfully baggy around the hips/thighs. and i can definitely pull the waistband away from my stomach that it may be too loose.”

“so go and get a size smaller and see.”

size 6, this time. i came back out and modelled the smaller size for both to see. i asked, “so? how do they look?”

well, i didn’t bother trying on a size 4. i do like my jeans on the more confortable size so i stuck with THEIR size 6. it’s still a bit loose but at least won’t fall off with just a tug (unlike the ones i currently own in my closet).

the thing is, i think it’s sad. that they have to lie to us women who shouldn’t be lied to about their size. what we should be told is that we’re okay the size that we are. that the size of our pants should not define who we are and that no two bodies will be the same so there is no ideal size.

i have the same issue with many scales at a few goodlife fitness centres i’ve been to. i can weigh anywhere from 5-10 lbs LESS than i know i weigh (i trust the scale at my doctor’s and at my dieticians – they have no need to lie and calibrate their scales regularly).

we don’t need to be lied to – in the end, that’s not doing us a favour. but more awareness on REAL body image is definitely a must!

thank god one company out there understands the importance of this.

i admit it, i’ve been giving into small indulgences. some of the mid-winter sales are a bit hard to resist. above are my recent purchases. aside  from the travel mug, everything else was pretty much a steal.

note – i tend to go on for a very long time between shopping for myself unless they are truly things that i need. for example, last weekend, i finally went shopping for underwear at costco. 6 cotton, undies – $2 each! comfortable but no granny-panties. all pastel colours of pink, peach, yellow, baby blue, etc. why pastel? i am a woman that tends to wear a lot of black, grey and other neutral/earthy colours. i try to add splashes of colours into my wardrobe and while i’m succeeding at it, some colours i can only wear unseen underneath my clothes.

i’m sure you wanted to know that.

as i was saying about my underwear purchase, i had to. i really had to buckle down and get some underwear. i had a bunch from my drawer that i try to wear on weekends as they are too big, but it was getting ridiculous. when one walks, they should not feel their underwear moving in all sorts of directions. when one stands up from bending over or sitting, one should not need to always hitch their underwear back up. when one changes out of pants, the underwear should not come off with the said pair of pants. underwear needs to be comfortable, yes, but it also needs to be functional. and my old pairs of underwear, perhaps 2 sizes too large, were not functional anymore.

that was definitely a tangent to what i meant to post, but there you have it. that is my underwear story.

anyway, the above purchases were: